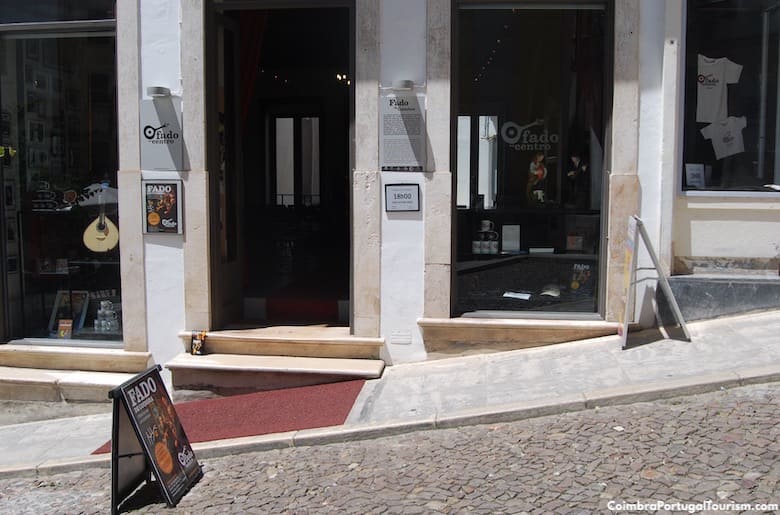 "Fado ao Centro," one of the places to listen to fado music in Coimbra

While fado music originated in Lisbon, it has a second home in Coimbra. Here, it’s exclusively sung by male university students (wearing their black capes), and it’s often not sung at all, with just instrumental pieces using the Portuguese guitar. You may be lucky to hear it at night at the cafés below the university, but the two spots with daily performances with the best musicians are the À Capella bar in a 14th-century chapel, and Fado ao Centro (see below).

To get to know the history and culture behind fado in Coimbra, visit Torre de Anto, which is a medieval tower that’s now a branch of the Municipal Museum of Coimbra. It displays guitars and other pieces that belonged to the most illustrious singers, guitarists and composers, and presents audio selections and occasional concerts.

If you’re in the city in early May, you can catch the annual “serenades” on the steps of the Old Cathedral. That’s when graduates say farewell to student life, singing songs dedicated to the beauty of Coimbra and the women they loved.

University students have sung on the streets of Coimbra since the 16th century, but in the mid-1900s fado became the preferred style. Many choose to turn poems into songs, and the guitar is different from the one used in Lisbon (larger and tuned a step down). Over time, it became its own genre called “Fado de Coimbra.” Here’s where you can hear it:


A 14th-century chapel, located behind the Santa Cruz Monastery, where a synagogue once stood, is now the stage of daily fado performances. It opens at 7pm to serve drinks and tapas, and the fado starts at 9:30pm or 10pm, depending on the season. The tables placed on the terrace outside are a perfect spot to end a day of sightseeing around the city. It attracts locals and tourists, and the singer often explains the music in English before his performance.


Coimbra’s landmark café is also a former chapel (built in the 1500s), and often presents free nights of fado (almost on a daily basis). It’s right next door to the Santa Cruz Monastery, so pass by to know when the next performances take place (usually at 6pm and/or 10pm).


Located on the street that goes up the hill from the Almedina Arch (Rua do Quebra Costas), this is where most tourists experience fado. Performances start at 6pm, and last for about one hour. However, it opens at 10am, so you may show up at any time and check out the books, CDs and DVDs, and even chat with musicians. It’s also recommended that you book your spot in advance.


1. Explore the 10 must-see attractions.
2. Decide where to stay.
3. See your transportation options.

Booking Deals - Book now and save up to 70% of regular rates.